The Urge to Grow

Pottering amongst my pots this afternoon, I spotted a nasturtium seedling which had sown itself in a most inhospitable place – the metal pocks of the fire escape. 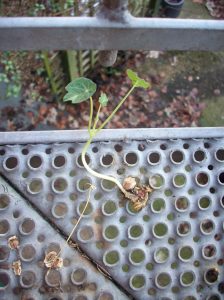 With the tenacity of a weed, this little nasturtium has demonstrated such an urge to grow that I’ve decided to leave it be, and see how far along in its life cycle it proceeds. I’ll be interested to see if it manages to flower..

Filed under Five Feet of Landing

Have you forgotten yet?..

Armistice Day has been and gone for this year, but the remembrance continues. A current exhibition at the Garden Museum focuses on the Great War through a horticultural lense.

The most obvious connection between gardening and war is the cultivation of crops. At the start  of WW1, much of Britain’s food and fuel was sourced from abroad, and securing a reliable food supply not really considered; although it became illegal to waste food, rationing had not yet become a necessity. But by April 1916, the German U-boat offensive had proved successful in curtailing supplies and Britain had only six weeks worth of wheat left. Lloyd George, stated that “Every available square yard of land must be made to produce food.” Gardens and parks were converted to allotments, and the government requisitioned land for farming. There was an extra three million acres of farmland by the cessation of the war, and rationing had eventually been introduced in February 1918. So important had food production become that the British Minister for Agriculture, Rowland Prothero, said in 1916 “It is my sincere conviction, that it may be on the cornfields and the potato lands of Great Britain that victory in the Great War may be lost or won.”

Of course, feeding a military population in the war zone was also vital, and local agricultural resources were put under huge strain. With the assistance of experts like Kew and the RHS, the British Army worked out that fifty square yards were required to nourish a single soldier. Vegetable gardens began to spring up within a few miles of the trenches: old battlefields were reclaimed and farmland succumbed to battle, like the cycle of nature, death and life informing each other.

It seems a bit weird to think of gardens at the Front, but it is so obvious – not just for food, but for sanity and respite. The most impressive-sounding garden behind the lines was at Talbot House in Belgium. In this soldiers’ club, all ranks were welcome, which was unusual for the time. The house had a conservatory and a garden containing pergolas, roses and espaliered fruit trees, as well as a thatched summer house, a dovecote and a chicken run. In the conservatory, a sign invited visitors to “Come into the garden and forget the war.” On the enemy side, German soldier Lothar Dieta wrote; “One can’t possibly feel happy in a place where nature has been devastated.” He describes how tree tops which had been blasted from their trunks were gathered and planted in the ground to create some semblance of nature. They also made “quite nice flower beds” by scavenging plants such as rhododendrons, snowdrops and primroses from the grounds of a ruined chateaux. In this way, they did their utmost “to improve things”.

The importance of nature was evident in ways other than garden-making. A collection of pressed flowers was on display, dating from 1917. They’d been sent by George Marr to his wife while he was posted in Salonika, Greece. He had grown up in north east England, and didn’t have a garden, but obviously appreciated the beauty of nature. This would have helped cope with the atrocities of war. I’m reminded of a poem by Humbert Wolfe which tells of a “fleeting hush” which fell when a thrush sang out across the trenches, and “paused horror, hate and Hell a moment”. 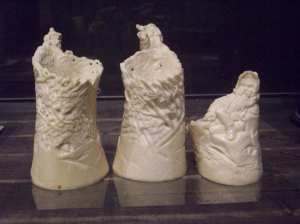 An unexpected set of artefacts in the exhibition were the gnomes carved from bone, by an internee in 1917. They were small, probably not even three inches tall, and represented the Cologne Gnomes, or Heinzelmannchen. According to legend, these gnomes performed the work of the people of Cologne overnight allowing the city’s citizens to be idle during the day. The sculptor was an Austrian woodcarver called Franz Grussel who was seeking work in England when war broke out and was imprisoned as an ‘enemy alien’ on the Isle of Man. Prisoners were often made to work in public gardens and on farms, and Thomas Hardy even recruited one prisoner to work in his garden at Max Gate.

Yet horticulture and agriculture were not just benign features of the war. Technologies originating in food production were sometimes utilised for weaponry. In Germany, Fritz Haber developed a process of turning atmospheric nitrogen into a usable chemical that became the key ingredient in both fertilisers and explosives. He also formulated toxic gases such as chlorine that were released in trench warfare. Ironically, a horticultural piece of equipment was one of the protections against gas: a knapsack sprayer used in peacetime for “spraying potatoes and ground crops” was used to dissipate gas clouds.

The tank had its origins in the land-based industries too. His Majesty’s Landship Centipede (as it was officially called) was an adaptation of  the 105 horsepower Foster-Daimler tractor. It was tested in the grounds of Hatfield House, where trenches and craters were dug, and barbed wire strewn about to mimic No Man’s Land and the German trenches. The tank wasn’t to prove particularly successful in the Great War, coming into its own in WW2.

While gardening and war seem utterly contadictory, this exhibition shows a vital link between the two. I would go so far as to say that gardens don’t need war to survive, but war needs gardens and horticulture to succeed, albeit in a subtle way.