It’s common enough to have a buffet cart on a train, or a cafe in the train station. Less common is a food growing area within a station’s boundary. But this is exactly what you’ll find abutting Platform 2 of St. Leonard’s: Warrior Square on the Sussex coast.

The potager was initiated by Transition Town Hastings who, in 2015, consulted with Southeastern Railway about the possibility of turning a vagrant patch of railway land into something more productive. A year and a half on, the resulting garden comprises four raised beds of varying sizes, soft and top fruit, and a wildflower bank with perimeter railings offering an extra dimension.

The planting in the beds looks quite random: sage and strawberries grow in the same bed as tomatoes, sweetcorn and rosemary, with courgettes, lavender and feverfew also in company; kale and dwarf french beans share space in another bed with parsley, celery, spinach and courgette. The plant associations that really intrigued me were the underplantings of the fruit trees: the apple is sub-planted with strawberry, and a plum and damson stand over tomatoes and courgette. I suspect these were spare plants slotted into a gap to see how they’d fare. Always worth a try.

plum (or damson?) underplanted with tomatoes

Up the bank, there is a mixture of edibles and ornamentals along the railings – cosmos, sunflowers, hebe, climbing french beans, nasturtiums.. all brightening up an otherwise bland bit of fence line.

At first glance, it may seem that the garden is overrun with weeds – more ramshackle than regular and ordered. But that is part of its charm, and has two advantages: the weeds spilling down from the wildflower bank extends foraging opportunities as some weeds can be eaten. They also increase biodiversity and hence pollinator activity, helping crops such as apples and courgettes, which require insect visitors to set fruit.

This is an open-access food growing site, with a help-yourself ethos: anybody stepping off a train here can garner a bit of veg to incorporate into their supper. If they can spare the time and energy to join in the fortnightly voluntary sessions, all the better. The underlying principles are those of the Transition Town movement, aiming to shift to a low-carbon society which is socially and environmentally just. Local produce is an integral part of this. And a train station is as good a site as anywhere to grow some tomatoes. Pass the vinaigrette, please! 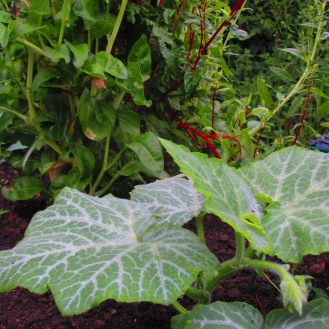 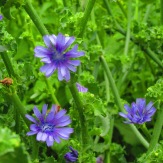